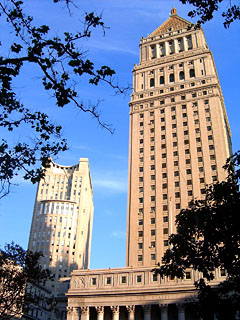 History of the Southern District Court

To learn more about The United States District Court for the Southern District of New York, click here.

Southern District Reporters, or SDR, is a partnership of approximately thirty court reporters. It was founded in 1932 with the merger of four court reporting agencies.

The U.S. Courthouse at Foley Square in lower Manhattan, one of New York's earliest skyscrapers, is known for its beautiful architecture. Designed by Cass Gilbert, a prominent architect of his time, the building was originally conceived as a modest classical structure. Instead, it became a monumental building housing the district and appellate courts, the office of the U.S. Attorney, and other federal agencies.

Gilbert, who had created other architectural masterpieces such as New York's Woolworth Building and the U.S. Supreme Court in Washington, DC, began constructing the building in 1932, but died before he was able to complete the plans, which included an interior as elaborate as the exterior. His son Cass Gilbert, Jr. oversaw the rest of the project, which was completed in 1936.

In 1995, the Daniel Patrick Moynihan U.S. Courthouse opened next door to the original Foley Square courthouse, and the Southern District Court, along with Southern District Reporters, expanded into the new building. Designed by Kohn Pedersen Fox Associates, the new building won a design award in 1996 from the General Services Administration. Three beautiful sculptures by Maya Lin, Sounding Stones, grace the plaza behind the building.

Recording the spoken word quickly and accurately has presented a challenge for thousands of years. As early as the fourth century B.C., a freed slave, Marcus Tullius Tiro, devised a system of shorthand to record the speeches of Roman orators. Among Tiro's innovations was the ampersand, which is still in use today.

Phonetic shorthand systems were developed in Britain in the sixteenth century and became popular for recording letters, sermons, and court proceedings. In 1750, Thomas Gurney, the first officially appointed courtroom shorthand practitioner, published a shorthand system for use in the courts. Gurney's system was replaced by the Pitman system in 1837 and by Gregg shorthand fifty years later.

By 1913, stenotype machines were introduced in courtrooms. Early machines were large and cumbersome, weighing as much as 50 pounds. In the 1980s, computer technology began to be used in court reporting.

Today SDR offers realtime reporting technology in every courtroom of the Southern District Court of New York. Transcripts can be ordered from our archives and delivered immediately in electronic format. Many of the attorneys practicing before the court utilize our state-of-the-art transcription solutions to represent their clients' interests efficiently and effectively.